My father called to tell me and my sister that we had a new baby brother on the day I was leaving for the Great Moonbuggy Race. I was a senior in high school. My sister was a freshman. I went off to school that morning thinking how strange it was to suddenly get a new sibling when I was almost 18 years old. 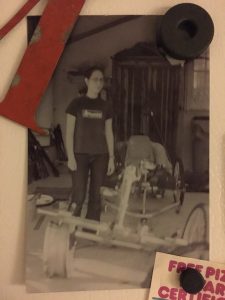 After my last class, I went to the parking lot to meet up with the rest of the moonbuggy team and our physics teachers. We piled into two rental vans, one of which was hauling a trailer with the moonbuggy inside. Then we set out on the four-hour drive from Suwanee, Georgia, where our high school was located, to Huntsville, Alabama, where the Space Center was hosting the moonbuggy race.

On the drive, I kept thinking about my new baby brother. And the more I thought about him, the worse I felt. I had had a good relationship with my father when I was young. I especially appreciated that he supported my dream of becoming an astronaut. When I was four years old I decided to become an astronaut after learning about Mars: The Red Planet. Red is my favorite color. I had to get there, and being an astronaut was the way to do it. Maybe it seems silly to choose a career based on a favorite color, but think about it. If I could go to a whole planet that is red, what else could I see as a space traveler? A lot of kids want to be astronauts when they’re four. But I was different. I was really going to do it. Even then, I had a sense that you can’t always count on adults. I knew that if something is important, you have to make it happen for yourself. So, I promised myself that I would visit another world someday.

I started planning right away. In elementary school I worked hard at math and science. I entered science fair competitions and Invent America. I was that kid who’s projects always looked a little too good and people would wonder, “Did she do that herself?” The answer is, “No. No, I did not.” It wasn’t that my dad did the projects for me. They were my projects. But he would get excited about helping, and maybe ended up helping too much.

My mother also encouraged me in my love of space. She signed me up as a member of the Planetary Society. A few times a year I got their publication, The Planetary Report, full of color images of stars and planets, and articles about things like what elements scientists believe must be present for life to be possible.

Both of my parents saved up to send me to Space Camp, at the Space Center in Huntsville, as soon as I was old enough to go. That was the summer after fourth grade. The next summer, after I graduated from elementary school, my parents got divorced and my father moved out. He was remarried before the end of the year.

My sister and I went to see him and our stepmother every other weekend. He no longer helped me with my experiments and inventions. And after a couple of years, he called one week to say that, from then on, when it was our weekend with him, he would pick us up on Saturday morning, instead of Friday night. He and our stepmother were tired at the end of the work week. Everyone would have a better weekend if we came on Saturday. But I didn’t have a better weekend that way. I missed my father terribly after he moved out. I was incredibly hurt that he could so easily give up even more of the small amount of time we had together.

In high school, I joined the marching band. The first time I had a competition on one of my father’s weekends, he said, “I’m not taking you to that. Just don’t come this weekend.” I had more competitions. I joined more activities. By my senior year, I hardly saw my father at all.

I was jealous of my brother. My father couldn’t tell him not to be there on Friday nights, or when he had activities my dad didn’t feel like driving him to. He would have my father in his life in a way I hadn’t for half my childhood. But at the same time, I desperately wanted this for my brother. Even though I hadn’t met him yet, I loved him. I wanted my dad to be better for him than he had been for me. Late that evening, we arrived at a motel in Huntsville. I shared a room with the only other girl on the moonbuggy team.

In the morning, we drove to a parking lot outside the Space Center and took the moonbuggy out of the trailer. It didn’t fit in the trailer fully assembled, so we had made the wheels detachable. We screwed the wheels onto the axles and a couple of the guys started test driving the moonbuggy around the lot.

Our moonbuggy was a feat of engineering. It had a rectangular metal frame that was pinched in the middle. There were four bicycle wheels – one at each corner. It was pedal powered, by both the front and back driver. We had levers to steer. There were two things about the moonbuggy that we were particularly proud of. The first was the universal joint in the middle. From that joint, the moonbuggy could bend up and down, something it would need to do while going up hills and into craters. It could bend side to side while going around corners. And it could twist, if diagonal wheels were both going over boulders at the same time. The other thing we were really proud of was the limited-slip differential we had put on each axle. An axle and the two wheels attached to the ends can be a solid unit, all moving together. But, if the two wheels need to rotate at different speeds, like while going around a turn, that can put strain on the axle. The limited slip differential allowed the axle and wheels to act as a solid unit most of the time, but also permitted a little give under pressure. Our moonbuggy was truly a masterpiece.

I should have been mentally preparing myself for the race. When it was our turn to do a timed run of the course the Space Center had created to resemble the surface of the moon, I would be one of the drivers. But I wasn’t preparing myself. I was thinking about my brother.

My father had become so disappointing in recent years that I had been considering writing him off – just not going to see him anymore. That seemed less painful than trying to keep him in my life and being constantly reminded that he didn’t care if I was in his. I couldn’t do that anymore, though. Writing him off would mean not seeing my brother. I wanted to be there for him. I thought he might need another adult in his life that he could count on.

I looked up just in time to see the guys run the moonbuggy into the curb. The front wheels moved on their axle as they hit. “Stop!” I yelled. “You’re breaking the moonbuggy!” They didn’t listen to me. They backed it up and got it going even faster. This time the moonbuggy jumped over the curb and came to rest in the grass. The front wheels were spinning freely now, the threading completely stripped where they were screwed onto the axle. I was right: they had broken the moonbuggy. But it was important to know about that weakness before the race. They took it to the repair tent and welded all the wheels onto the axles. It was much stronger that way. We would have to well and truly break it to get it back into the trailer, but that would be after the race.

My physics teacher had seen me yelling at the guys. She led me behind the trailer. “Sarah, you are showing signs of panic. You don’t have to do this.” She thought I was panicking about the race, and was offering to replace me as a driver with someone else from the team. I had spent the past fourteen years preparing to drive a moonbuggy. I could drive a moonbuggy. I wasn’t ready to have a new baby brother.

My opportunity to drive the moonbuggy was slipping away from me, though, and it meant so much more to me than my teacher realized. I started my senior year still on the trajectory of becoming an astronaut. I was in advanced placement (college level) physics and calculus, even though I had already met my high school’s science requirement and could have taken an easier math. I wrote a research paper for my physics class on how scientists search for extrasolar planets (planets outside our solar system). And, I signed up for the moonbuggy team.

At the same time that I was using all the math and science I had learned over the years to help design and build the moonbuggy, at the same time that I was researching conditions on the surface of the moon to anticipate what the race course would be like, I was applying to colleges. And it was a moment of truth. Was this really the path the rest of my life was going to take? I was also in my fourth year of marching band and my third year of Latin. I was in advanced placement English. I had been taking piano lessons for almost as long as I had been an aspiring astronaut. I loved all of these things. And I knew that I wanted to have kids someday. I had no doubt I could find a way to both have children and be an astronaut. But I figured that a round trip mission to Mars would take at least two years, probably longer. I knew what it was like to have a parent who wasn’t around as much as I would have liked. I didn’t think it could be part of my plan to have kids and then leave them behind. In the spring semester, I committed to starting at the University of Georgia the next fall, as an English major.

After that, the moonbuggy project became bittersweet for me. It was the culmination of a lifetime of astronaut training. Driving in the race would be my big send off to my childhood dreams. But only if I actually got to drive.

I needed to stop panicking. I told myself I could figure out how to be a big sister to my new sibling later. Right then, I had another child to think about: myself. I had promised my four-year-old self that I would visit another world some day. It was time for me to drive across the moon.