“Rogue intensities roam the streets of the ordinary.” – Kathleen Stewart

I’m going to marry that boy, you promised the grownups. Or so I was told later, back home. Maybe impulse drove you to blurt how your future looked in a passing moment. Or maybe at age ten, an excitable girl, you actually saw the future, whole and busy and colorful. Did you know, when we met that summer, that my immediate family had just exploded? Dad gone adrift post-divorce. Mom free of the drunk at last. Edgy, love-haunted, Salem chain-smoking. 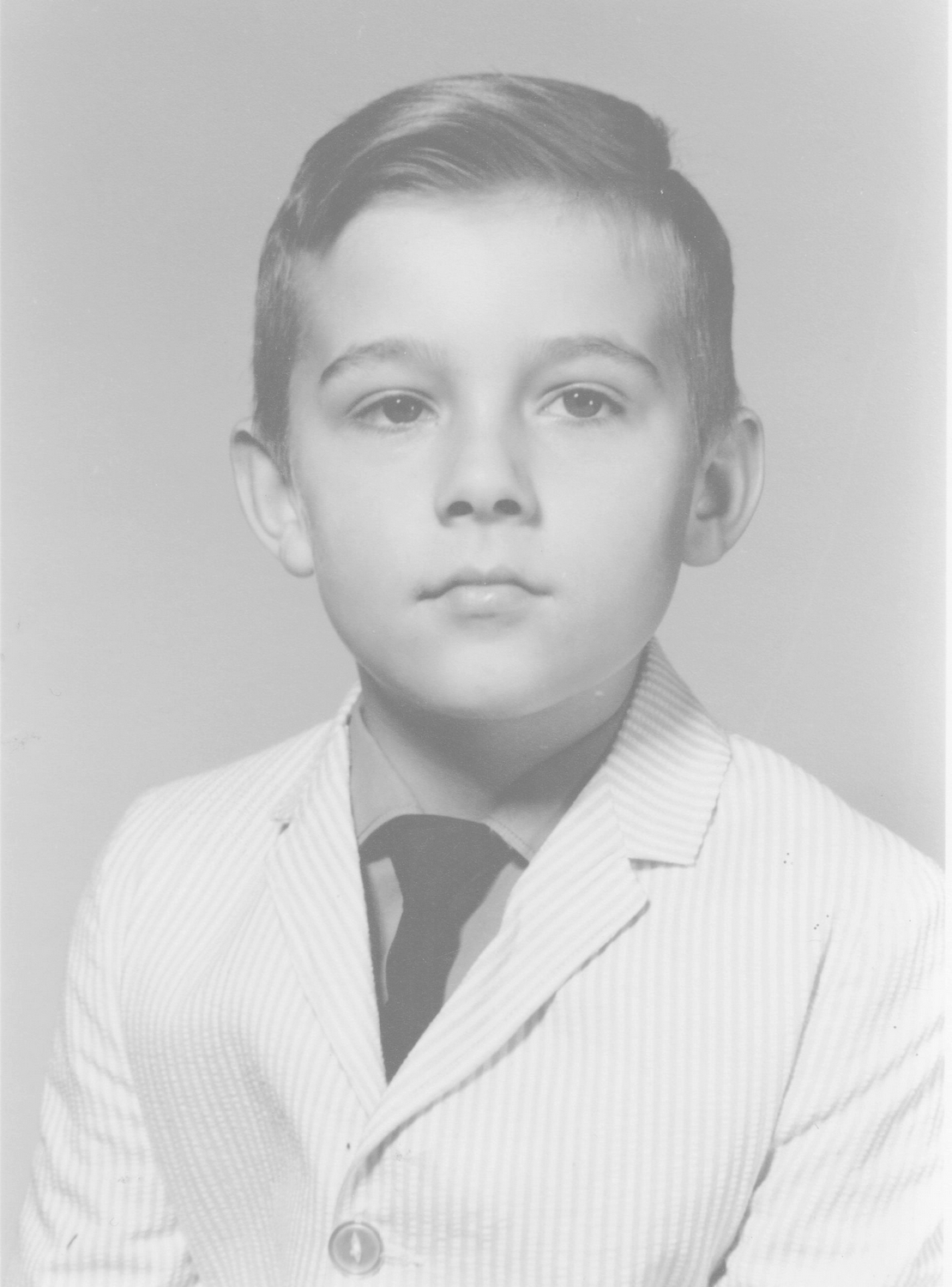 Here’s me in 1961, the sad first-grader from Illinois, arrived with his grandparents for a week with Virginia mountain kin. He shuffles from the gas station, peels the wrap off a Popsicle. Cuts across the outfield, past the tomboy who fist-smacks her mitt, waiting for the play.

He feels her gaze on the backs of his legs.

Suddenly she’s in front of him. “Gimme a bite.” Her half-smile almost a sneer. Sandy hair in her face, eyes glittery behind like a hidden animal. The game stops. “I wanna bite.”

Her teeth sink into the icy pillar, an almost inaudible crunch. Tilts her head, lips tight, savoring. Swoons. Whips back the hair and those eyes flash open. “Now you got to give me a kiss!”

At bedtime, she shows up again. Sallie – the big people know her name – still wants a kiss. The big people are too amused. They fail to defend him, and he scrambles under the blankets. She dives in. Amid their tussle, air under fabric quickly turns humid. He smells grass, dirt, the rhubarby tang of girl. Sallie gets what she came for. You do.

You take me hiking. We flick Japanese beetles into a pond and the trout rise, a swirly slapping froth, then gone. The trout knows nothing of the beetle’s life on the bush, nor does the beetle know of the bush’s root system (only the delicious leaves), nor does the bush know of the antlered buck’s terror as it clambers past and gunshots ring. Nor do we, as by then we’re on a distant hillside watching the Holsteins graze. You point out the salt block, sculpted by cows’ lapping into an exotic shape, a smooth glide that I will one day startle myself to recall when studying the body of a nude woman.

All the matter in the mattering world matters to us. The salt block wants our tongues. Wordlessly we’re on hands and knees, faces against the gooey-slick. A distracting texture that flavor must find its way through. Bits of straw, black specks in the slurped ivory. We rotate strokes, ecstatic. You watch me. I watch you. We can’t stop.

Years pass. Sallie’s in high school, my grandmother Madeline tells me, her finger tracing lines on the handwritten letter. I picture you, but fading. More years. Sallie’s married now, Mad says. I register the news as a sort of wonder shaded with betrayal, mild. Then: Sallie has a little girl of her own. I graduate high school.

Jump to 1988. Mad’s in the hospital, her colon ruptured. Coma, the doctors say. Slim chance. My uncle Theodore is delayed – in Virginia, oddly enough, where he’s visiting our people – but hits town the second afternoon, when my grandmother has miraculously awakened. He tugs me into the bright hall.

In the following weeks I use genealogy websites to trace how we’re related. Did you know, or was it as much a blur for you as for me, that my grandmother Mad’s brother was the husband of your father’s sister? More than enough distance on the family tree for us, anyway. Marry that boy.

I sift newspaper clippings and righteously fume at their descriptions of you. “Thin blonde,” say the neighbors. “Wild, volatile, and irrational.” Someone who claims to know you well says you “never grew up.”

A journalist myself, I understand the grabby, often slapdash nature of reporting. Fragmentary, steps removed from a reality that’s ungraspable to start with. I understand – and fume.

The Virginia clan informs me that you “got interested with the ‘dope crowd’” early on. Estranged from your husband, you have a “pretty brunette” daughter, 16. She “appeared normal,” the newspaper says. This daughter is charged with your murder. Small-caliber handgun. “Multiple” bullets to the head.

I ransack the internet for details about you. Find the obituary for your mother, Eleanor, who died “unexpectedly” at age 82 in February 2011. She loved her seven children. Also gardening, animals, and Elton, her husband for 65 years. I find the obituary for Elton, 86, who followed his wife in June of the same year. Proof, an example.

One happening leads to another, I guess. Any effect depends on its cause. But doesn’t cause depend just as much on effect? Neither takes priority, both dissolve in an embrace, and this is how I stop time. Just not for long.

Radiant, youthful Eleanor, your mother in a photo that you may have seen, cradles a puppy. In one that you likely didn’t see, your dad Elton – bald, speckled, perhaps arthritic –  digs into a Christmas gift bag. Of you I can find no photos.

At this moment I feel helpless that I’m not able to visualize you, and ridiculous admitting how long you’ve been with me, and embarrassed by trying to say in what way you’ve been present. You peered over my shoulder at my slippery firstborn, red and squealing. You nodded, silent, when I acknowledged my first gray hair, plucked.

I’m better at perceiving absence (vastly much more of it, maybe why) than what’s in front of me. Is it preferable to die a certain way? Would I rather perish in a head-on crash, mangled meat? Or scream into oblivion tumor-sunk, entubed and beeping on the crackly institutional slab, their goddamned TV in my face?

From Eleanor’s obituary: “We recall occasions while growing up when our mother would take in friends who had nowhere to go.” You rode with me west when I wandered, another marriage kaput. One morning near the park where I had pulled over to sleep, I watched the hunter empty his bag of birds onto a table. His dog circled madly. The hunter unsheathed his knife and inserted the blade’s tip into the shoulder wedge of each bird, one by one, wrenching loose the feathery flaps. They came away bloodless every time. He tossed the wings into the “collection barrel,” which I hadn’t noticed until then.

I touch my companion’s thigh in the winter dark. She stirs and whispers. Your hand. Hot. (I’ve experienced the heat by placing my palm on my own bare shoulder, and I want the experience to be hers also. A peculiar fever I’ve had since a boy. Doesn’t register on a thermometer. I used to fantasize throwing myself naked into a snowdrift, the hiss and great clouds of steam … ) Now I flatten my hand against the wall above the bed. I touch her again. Mmmm. Cool. Still groggy, let her sleep.

I feel her; she feels me; we feel each other mutually and ourselves individual, apart. I feel the wall, but the wall can’t feel me. Then she feels me and feels, by way of me – who is changed – the wall. So many things are like this.

Your daughter works out a plea bargain, serves time. I hear from the Virginia people that she’s living in Roanoke, not far from the trout pond and our Holsteins. One more image: Coy leaves hide clusters of Concord grapes, thick with promise. The fog on their surfaces picks up our fingerprints, proof of contact. Next the evidence is partway inside our bodies. Between our teeth the grapes pop sweet and sudden and voluptuous. We chew them down to their bitter, irreducible skins. 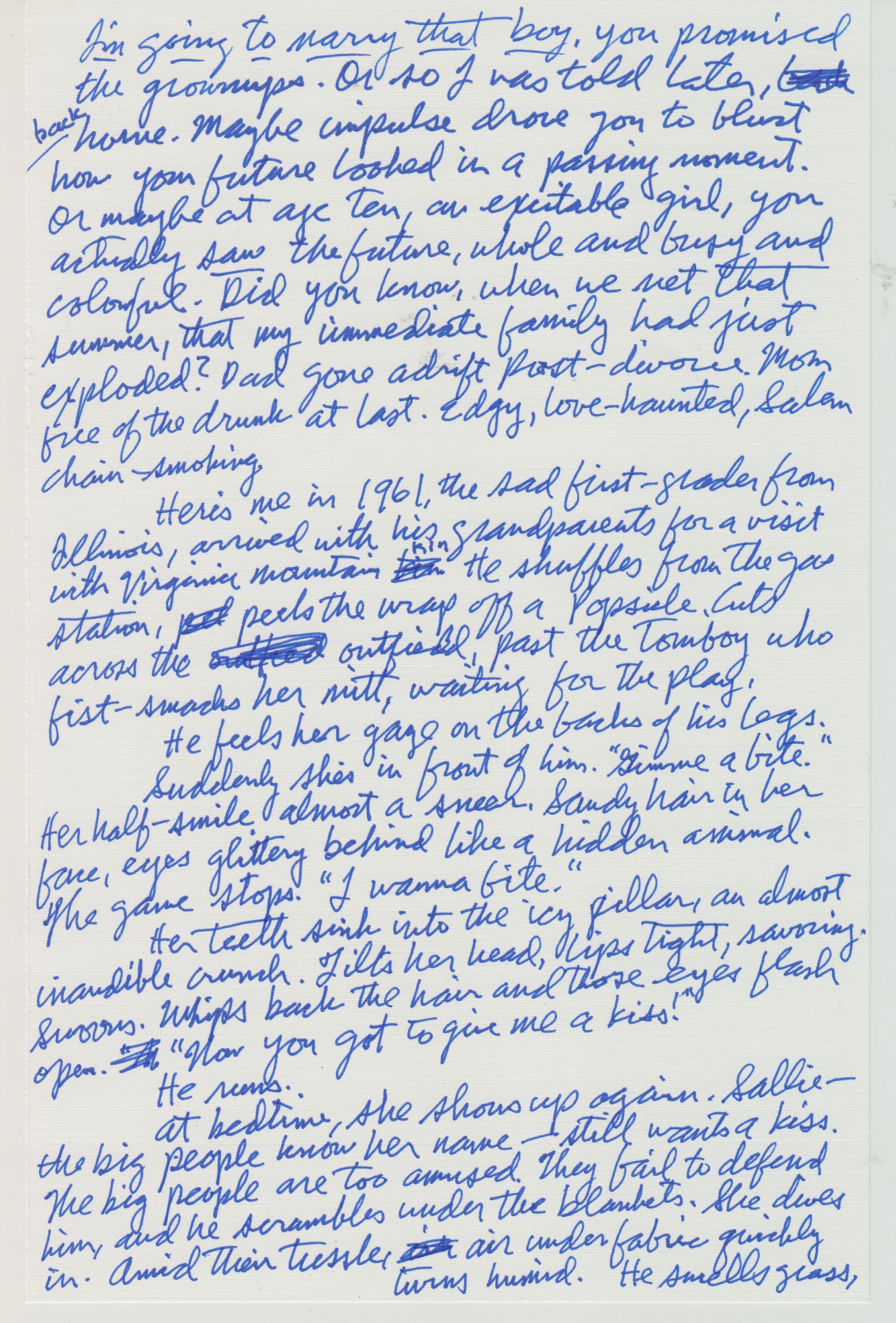