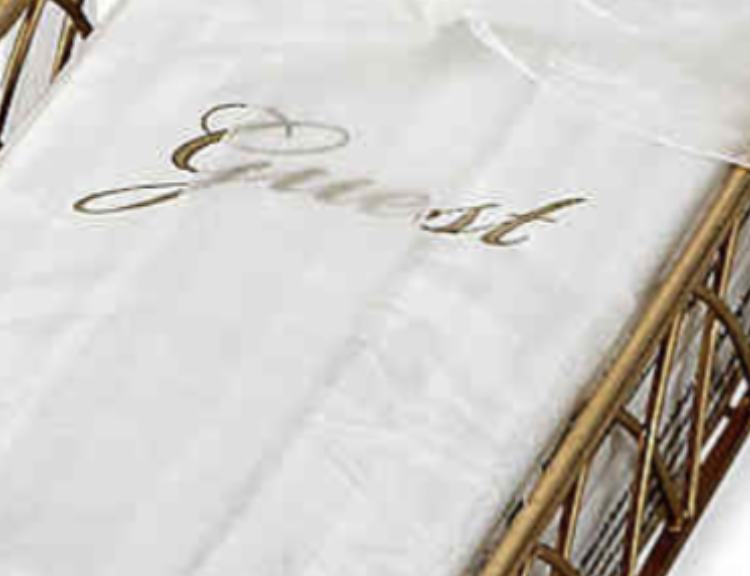 White with “guest” written on their front in calligraphy and framed by embroidered leaves like early spring shoots poking up from beneath snow, the napkins blanketed the backseat as though deposited by a freak storm.

My friend Maggie was the first person to notice them. Happening to glance behind her as I was driving us from my place to My Parents’ Basement, she said, “Oh. You have napkins in your backseat.”

“Yeah,” I said. “Mom gave them to me. I just… I still haven’t gotten around to taking them inside.”

“Do they… do they say something?” she said, reaching back.

Giggling, Maggie asked, “Why do they say ‘guest?’”

“What do you want them to say?”

Catching Maggie’s giggles, I said, “Well, as a guest, feel free to help yourself to some napkins.”

Other passengers have had similar reactions. But only after that initial question had been addressed would guests think to ask why the napkins are there in the first place.

Before they’d been strewn about the backseat, they’d resided for months in my car’s trunk where I’d left them – unable to transport them inside. The napkins’ promotion to the backseat came about because, one random afternoon in the middle of the week, I happened to notice that my car’s rear right tire had become flat. A regular MARTA rider, I didn’t necessarily need my car and waited until the weekend to see about it. The next Friday evening, to reach the spare, I took off the detachable ledge that covers the trunk, aiming the felt board for the space in between the backseat headrests. Underneath sat the loose mound of guest napkins. I grabbed clumps of them, tossing the napkins into the backseat, letting them flutter wherever they could.

After digging the jack out and removing the spare, I positioned the jack underneath the car and slowly raised it until the car let out a disconcerting metallic-sounding shriek. I lowered the jack, repositioned it, and tried again. The car remained silent this time. With the car in its lopsided position, I tried to loosen the lugs, but they were on too tight. Thwarted, I called the number on the back of my insurance card to request a repairman, scheduling it for early the next day in hopes that I could score a walk-in appointment at a mechanic’s.

Before sunup the next morning, the repairman and I surveyed my car – the repair man, sitting on the ground. “This tire ain’t flat. It needs air.” He leaned forward to peak at the others. “They all do.”

Not knowing what to say in response and feeling ridiculously formal, I presented him with the spare, like I were handing him an award. He snatched it from me, grumbling, “Spare needs air, too.”

With everything he said, I heard an unspoken, You damn fool.

Once he’d put the spare on and I’d signed a form for my insurance, I headed for Pep Boys. I soon noticed an ominous looseness in the rear of the car that became worse the longer I drove. At the Freedom Parkway intersection, I considered my options: the longer route on side streets or the faster highway.

The longer route seemed more perilous, and I decided on the Connector where the looseness quickly evolved into fishtailing, and no matter how hard I pressed the gas, the car would barely reach higher than sixty. With every curve and lane change, I careened more wildly, but, as alarmed as the drive made me, I thought it best to press on. At least Saturday morning traffic meant I could go a little slower. The connector split, and I took I-85 North. Soon, I rounded the curve of the expressway and could see my exit when a terrible scraping noise filled the car. I put on my hazard lights and headed for the breakdown lane – the only thing I could think to do. On the shoulder of the highway, I turned the car off and watched traffic for several moments, catching my breath, before I climbed to passenger side and stepped outside for a look around the car. The spare had been shredded, broad ribbons of rubber unfolding from the rim. I called my insurance again to request a tow.

After the call to my insurance, I called Dad. It seemed like something I should do. “I can come pick you up, son, and we can get you some tires out here.” “Out here” meant back home in Covington – about forty minutes east of Atlanta.

“Dad, that – I appreciate that – I really do – but that doesn’t make any sense. I can see the exit. I was so close. I almost made it.”

“There’s some great tire prices out here, son.” He repeated his offer: he could pick me up and buy tires for me out in Covington. The news had short-circuited him. He didn’t know what else to do. It must have reminded him of Mom and how all he could do was sign the DNR. That had only been five months ago.

A massive truck with flashing lights had pulled up behind me on I-85’s shoulder. Wearing a reflective vest and with a walkie-talkie on his belt squawking away so loudly I heard it above the roar of the highway, a man climbed out. Carefully walking on the shoulder, he approached the front passenger’s side door and knocked on the window. “Is everything okay?”

“Oh okay,” he said, visibly relieved — an attitude made me question whether he
was a cop. “Man, what happened?”

“No, really!” I said, nodding vigorously, happy that someone else – an official of some nebulous sort, no less – also appeared taken aback, dumbfounded at how such a thing was possible.

He looked at the rear tire and let out a whistle. “Man, you know you’re having a bad day when that’s what the spare looks like! It’s barely hanging on!”

“Do you need me to stick around?”

“Well, take care. Glad you have someone on the way,” he said, and, staying on the shoulder, walked to his truck. He flipped on the truck’s flashing yellow lights and merged back into traffic. It was the benign and reassuring – yet simultaneously vague – encounter Mom would have attributed to an angel.

Waiting for roadside assistance, I noticed early white blossoms on a tree a few feet away in the median – the first early sign of spring. The wind tugged a few petals loose, and I saw, already, a smattering of white on the ground around the tree, like my napkins on the backseat.

Soon, the tow truck pulled up behind me like the last vehicle had. “It almost looks like you hit a pothole going too fast,” the driver said in a rather accusatory way after he had conducted a preliminary inspection to confirm that I did require a tow.

What pothole? I wanted to ask. I wished the non-officer were still there; he’d believed me. The driver escorted me to the cab where I sat and watched traffic while he secured my car to the truck’s bed.

“The Pep Boys up on Ponce.”

“You drivin’ your car, and you don’t know where you was goin?”

“I knew where I was going. I just don’t know the address.” Shouldn’t a tow driver know that address anyway? Where was he taking all these cars? Out to Covington?

A few minutes into the drive, sensing that we had gotten off on the wrong foot, the tow truck driver said, “So what else you got going on today?”

Sir, when this interminable errand is done, I’m going home to cry, I thought. Aloud, though, I said, “I don’t – I don’t really have any plans. I might go to a board game thing.”

“Huh. I hear they got some bars with video games you can play at the bar.”

“There’s one like that – Joystick – near where I live.”

“Man, that sounds great. You play video games?” We hadn’t driven far but were already on the exit, slowing down for the sharp curve that would spit us out on Piedmont.

“I go through spurts where I play.”

“Where’s this Joystick at?”

By the time I gave directions to Joystick, he’d swung around to the service area of the Pep Boys. While he set to work unloading my car, I went to the help desk inside and explained what I thought to be the problem – a flat – and requested a patch. I had made it by ten in the morning – only an hour later than I’d intended, but there were already several people ahead of me in line.

Still dazed by the accident, I sat in the waiting area and read and drank coffee, before calling Dad to update him. I assured him I was fine and then told him my plan about getting the tire patched. “Son, I really think you need to ask them to see what’s wrong,” he said before offering to pick me up and buy tires in Covington as an alternative to the whole rigmarole.

I considered what he’d said and finally approached the service desk to ask the technician if she would take a look with me and let me know what she thought I needed.

“Oh, they all look low!” she said as we approached the car. “They might be dry rotted.”

“What?” I had never heard of such a thing.

“Dry rotted. It’s from being out in the air and not being driven a lot.” She gripped one of the tires, squeezing. “Oh yeah. This is dry rot all right. Feel,” she said, inviting me to grab a hunk of my tire like I was judging the ripeness of fruit. “Feel how there’s no give, and it’s so hard?”

“That’s dry rot. Yeah, if you park it outside or don’t drive it too much, it can get like that. Now, I can patch the worst one. Or I can have all them patched, but really you need new tires.”

“… Let’s do that then,” I said numbly. I took MARTA to work! I lived in Cabbagetown and walked to Little Five! I used the Beltline! I would sometimes go weeks without driving! Now, I was being punished for doing the right thing.

Queasy from adrenaline and the thought of buying four tires, I couldn’t concentrate on reading. I began pacing up and down the aisles instead.

Usually, at this point in a car trouble episode, I’d call Mom and vent all my fears about the money. She would offer to help; I’d refuse, and I’d feel better. I’d remember that I could handle it and would then find myself reassuring her.

But now I couldn’t talk to her.

The reality of it all hit me then.

That’s how, early on a Saturday morning in January, I wandered throughout the Pep Boys, among the aisles of Looney Tune mud flaps and cherry-scented air fresheners and shiny rims and tires and batteries.

As I walked all over the store, I realized how easily I could have died and that I’d gone almost as quickly as she had. Mom had been so busy attending to others, being the perennial hostess, and seeing to everyone else’s needs that she never saw to her own health. Once her sepsis infection became insistent, she went quickly.

Meanwhile, I had almost died because my tires had dry rotted from disuse.

Unable to call her, unable to be comforted by her, I had no other choice. I summoned up my own strength and talked myself down.

Hours later, my tires had been changed and aligned. I signed more forms, and then, finally, headed outside to the car. As I called Dad to let him know I was on the way home with new tires, through the car’s windows, I saw the backseat full of the Mom’s guest napkins.