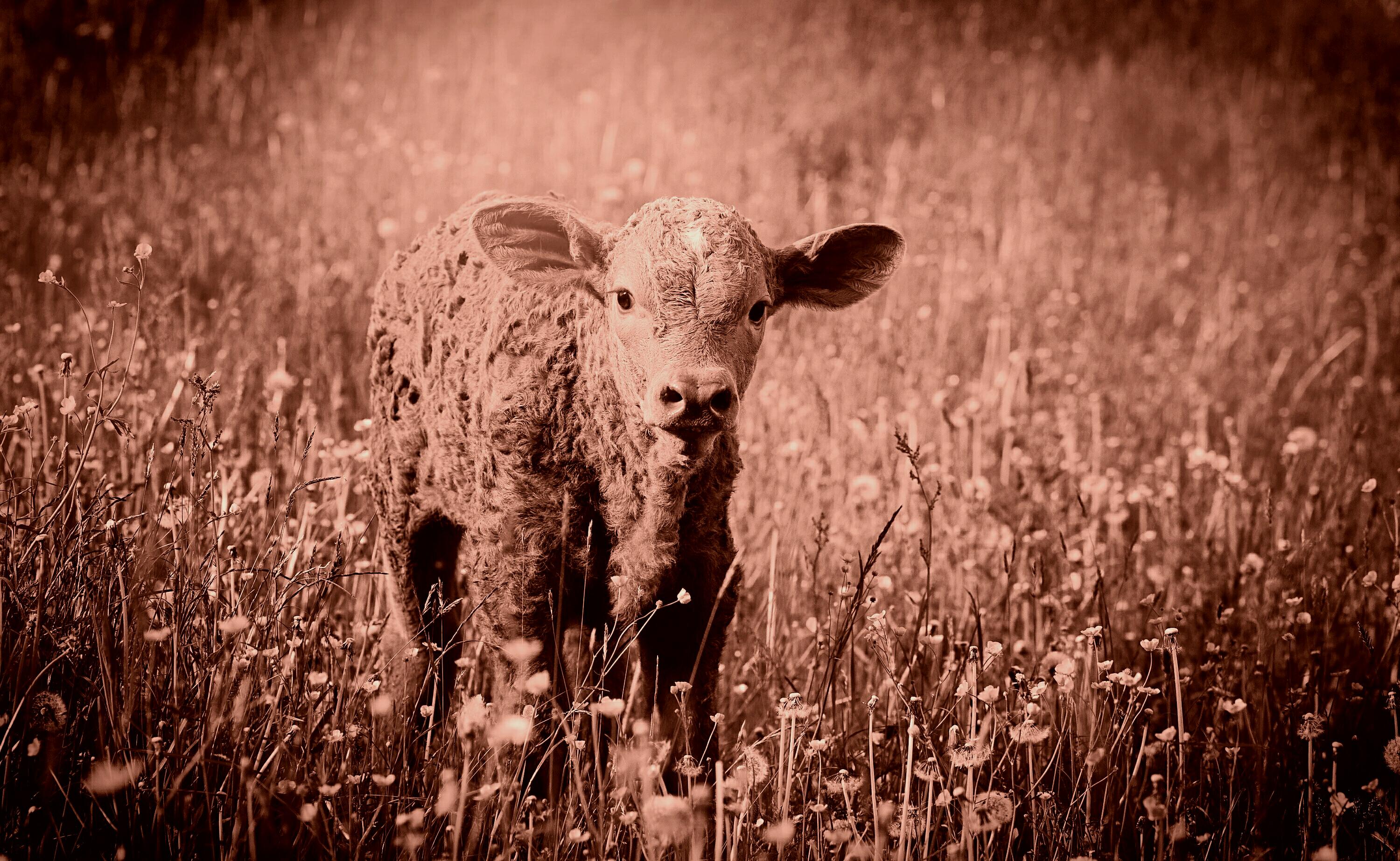 The nervous one called Aaron couldn’t dance for shit. It was like watching a giraffe with a broken knee and an inflamed nutsack trying to do burpees. Not that the calf had ever seen that before. Or that burpees had even been developed as an exercise yet. One day, men who would come into work from the gymnasium and bend their knees and say to coworkers, “Oof. Leg day,” would also mention burpees a lot. Somehow, the calf just knew this. Knew it all. How the sunrise looked from the top of any and every mountain. Knew the truth about Stonehenge. Knew the decimal places of Pi. All of them. He knew everything all at once.

Which made pinning things down to a specific time kind of tricky. Just a little earlier (Was it today? Yesterday? A thousand years ago?) the calf had known nothing. To say he existed in a void implies awareness of it. He wasn’t aware. He wasn’t anything. But then, just like that, here he was. Golden. Gleaming in the firelight. The people cavorting around him. Naked. Chanting. Dancing. Worshipping. He wished he could offer an appreciative moo. The people seemed to maybe expect it.

The calf breathed in deeply. Smoky. Some sort of seasoning. Was that sage? He thought about it for a second. It was sage. It smelled delicious. Not that he could eat it. He couldn’t open his mouth. Didn’t even have a stomach, let alone the four of most cows. But somehow he was sated. Slaughtering a bull. Presenting burnt offerings. This pleased him. The smoke. The beef. And, sure, that part did seem a little contradictory and wrong, given his bovine form. But, what were wrong and right to the divine? Heh. Divine. Bovine. He suppressed a chuckle. He hoped Aaron had shaped his face to look stern. Amusement wouldn’t really inspire awe or reverence in his people.

“Up,” they had said to Aaron. “Make us gods, which shall go before us.”

Aaron had sighed. His brother had a mountain god, a god of plenty and protection and nature-warping miracles. But also of fire, and locusts, and vengeance. On balance, Moses’ god didn’t seem like one you would want to forsake. But, faith and reason and loyalty and patience weren’t an easy mix for the people. They’d said, “As for this Moses, the man who brought us up out of the land of Egypt, we know not what is become of him.”

Aaron’s brother had led the people through seas, deserts and mountains. He’d faced down the Pharaoh. The whole kingdom, really. He’d stood stoic in the face of plague. Of blood-soaked horror. But, Aaron’s backbone was not as stiff.

“Break off the golden earrings, which are in the ears of your wives, of your sons, and of your daughters,” he’d said, improvising as he went. “Bring them unto me.” The calf knew Aaron had felt uneasy about the whole thing. The melting of the gold. The shaping of his body. The making of a god. But then the wine started to flow. Given how Aaron was dancing now, he had gotten over it, at least for the rest of the night.

The drippings from the meat sizzled on the fire and gave off a savory smell. Umami? Was that what you called umami? The calf knew that one day, insufferable know-it-all foodies would use this to describe some flavor, but he couldn’t figure out what they would mean by it. Umami. He said it to himself again. It sounded funny. Heh. Ooo-mah-mi.

The calf took another deep breath. Not so much for the smell this time, but as a savoring of the moment. Just look at them all. They were ecstatic. Blissful.

They couldn’t know that a little later, Aaron’s brother would come down off the mountain and see all this and throw a shit-fit. He would scream and smash stone.

And the calf knew what would come next. Moses would pull him down. Grind him to dust. Mix the dust with water and make the people drink it. Godhood reduced to Ovaltine. Not as any sort of drink-your-vitamins-and-minerals gesture, but as penance. And even then, Moses would still have a few thousand of them killed. His god would demand it.

It would happen. Tonight? Years later? Sometime. But, for now, the calf just wanted to watch the moron dance some more.